Recruitment and the Problems with Secrecy in Agencies 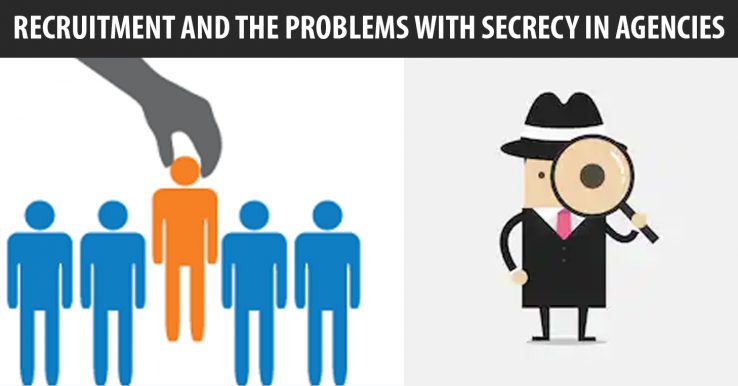 Anyone who has been in the recruitment industry for quite some time will agree to the fact that there have always been problems with Secrecy in Recruitment. As you probably know, there are several recruitment agencies that are present and the chances of similar clients are bound to be repeated. Simply because job seekers give their résumés to more than one agency, apart from applying individually to job specs and companies as well.

So let’s look at some more aspects as to why, professionals in the field have a tough time. Therefore, here’s something that you might be interested in and besides it’s a relief to learn that you are not the only one, hence “Recruitment and the Problems with Secrecy in Agencies .”

It’s common knowledge that you as a recruiter would be hesitant to mention the names of the companies that you work for. This is because they are worried that if they reveal their cliental details to their clients their competitors will try and get these candidates that approach others in the recruitment and they will get them into that interview instead.

Candidates that approach recruiting agencies, aren’t aware of where, when and which companies have their résumé. This doesn’t work very well for candidates as they will not know which company will be calling them and if it is one that they didn’t want they generally don’t have much choice in the calls that they get.

If the candidate has approached one recruiter earlier and then another one comes along and is able to get the candidate to concede by portraying that this company would be the best choice for the candidate, little do the candidates know that their résumé has already been sent to that company.

This technique is known by other names such as, First In, First Out (FIFO) or Last In, First Out (LIFO) is usually followed by companies that are looking to recruit individuals. So they will usually start with recruiters who introduced that candidate first or the ones that arrive last with the candidates CVs. Interesting isn’t it?

When candidates have two representatives and they are required to choose one, they are stuck in a tussle as they have to decide by whom they would like to be represented and nobody would want to be on the deciding side of the game.

Well this continues to pose a problem for companies as the landscape of recruitment is changing rapidly. Companies now face the problem of a shortage of skilled candidates which is likely to continue for the next few years or so.

Well when recruiting individuals make sure that you maintain secrecy as and when required. As recruiters it is essential that as far as possible we stick to the candidate’s choice as this will work well for us and are likely to come back to us for future jobs also make sure you do justice to the efforts of our clients. This will reduce the problems of secrecy that we face.