Difference between Passive and Modern Headhunting 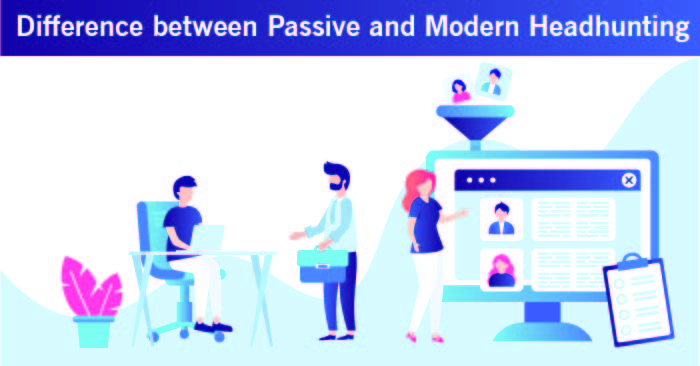 The recruitment field has evolved and is at a whole new level when it comes to satisfying a company’s recruitment needs. Although there are several techniques and strategies that recruiters use to scout candidates with the necessary qualifications and skill sets. One such technique is Head hunting.

For those of you who aren’t aware of what headhunting is, it is essential that you have a clear understanding of the term. So before we go in to the nitty – gritty of things and address the main question, “Difference between Passive and Modern Headhunting” Here is a brief understanding of the terminology. The obvious question that is surfacing is what is meant by the term headhunting?

What is meant by the term headhunting?

Headhunting or commonly known as head hunters are a hired third party, that is used by companies to target talented employees of a competitor and is generally done to avoid litigation or ethically murky waters that companies generally share a reputation for. These individuals usually receive a percentage of the annual salary of the targeted employee. They are usually from either human resource or have a corporate recruitment background and are known to have a reputation of being aggressive and notoriously fearless individuals. There are 2 types of headhunting, Passive Headhunting and Modern Headhunting. Well now that that’s cleared we can now proceed to the main topic of discussion.

Difference between Passive and Modern Headhunting

As mentioned earlier both Passive and Modern Headhunting are types of the same that are different as such they have different motives, reasons and ways of doing things. So let’s get a better understanding of each.

The traits mentioned earlier stand true even for these individuals. It is so termed as the candidates they seek are usually ones that aren’t actively seeking jobs. They are so called because these individuals proactively scout passive candidates with the desired skill sets while the Human Resource department generally wait for such candidates to walk in for interviews. The task involves calling and visiting potential candidates at their current place of business, even their home or their favourite restaurant. It is usually seen as an intrusive, aggressive and even slightly unethical as well.

You are probably familiar with this form of recruiting, if not than this will jog your memory.  Ever heard of Social media recruiting, well recruiters mainly use social media to scout candidates for the vacancies that they have. Popular social networking sites like Facebook, Twitter, LinkedIn and Google+ are mainly used by sourcers as well.

Now that you have a fair idea about what is meant by headhunting and the difference between Passive and Modern headhunting you can now decide on which method works for you and accordingly follow that method. If not you have various techniques to choose from that will ensure that you get the desired and capture the candidates with the right calibre. So don’t fret and build your pipelines to a successful recruiting rate.